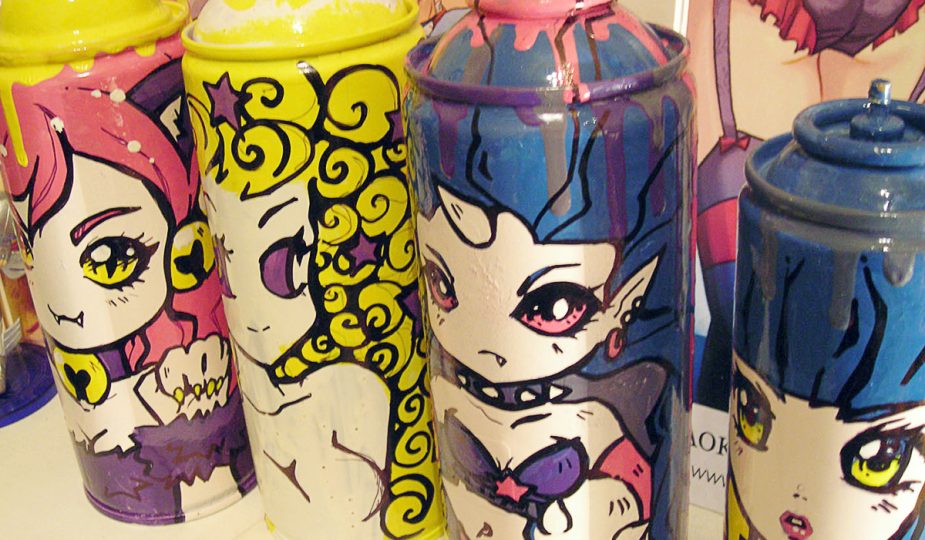 StreetLove is happy to introduce you to the graffiti artist Mako Fufu from Argentina. I first discovered her artwork on Twitter and I found it very interesting! Mako Fufu is from Buenos Aires.

« MAKO » comes from one of her favorite animation characters Makoto Kino (aka « Sailor Jupiter » from « Sailor Moon » which was also her first nickname). She has a lot in common with her.
And « FUFU » is from « Lenore, the cute little dead girl« . There’s an episode when she dresses up as Little Bunny Foo-Foo.
Once, playing around I’ve signed one of my first tags as Mako Fufu. « It was funny and sticky, so I kept it! »

Her art started more like a public place art… specifically… Girls bathroom art. It started in 2002. I was beginning my studies for a degree on Graphic Design. I wasn’t really into it, but I had no idea where I could study something more – Art-related – than that.
Workshop classes were 4 hours long per subject, and they were really boring. So I’ve started taking short breaks, to get some fresh air.
During those breaks, I used to go to the bathroom just as anyone would. But I’ve noticed something: there were LOTS of written stuff on the doors, but no art! Nobody would see me there while I was drawing behind a closed door, but they would eventually see my art. So I bought a regular permanent marker and made some drawings.
I’ve enjoyed doing that, so I did it again – And again – and I’ve started making a pic on every flight.

Finally, she felt alone, bored and she just wanted to share her art.

Eventually, the bathrooms were filled with art, not just hers, but from other girls as well. People then added congratulations next to her work… « It was awesome! »
Today those bathrooms are still full of drawings (and still some of hers as well).
She even heard that during Saturdays, when there are only a few people at the Uni, guys visit the bathrooms to see the doors. Some male friends of hers have confessed that they saw the doors!

She began street art in 2003, at 18 years old, when she decided to try stencils, so she made a few by herself.
During 2009 she joined a group of illustrators who would draw for a deck of Tarot cards. The card came up awesome. And the rest of them wanted to make Street-Tarot-Art as well.
And Mako Fufu learned the essentials and more about stencils!

She mostly works alone.
But she is part of a girls crew. Together, they wheatpaste and they call themselves « Federación de Stickboxing« . The group adopted her after a seminar, where she learned the wheatpasting technique from them.

When she is not painting, Mako Fufu is thinking art anyway! Working on personal projects like her webcomic (Check out: www.fufucomic.com.ar) and her « POP art » – videos in progress (Check out: www.youtube.com/makofufu).
She also works as a freelance artist making illustrations for books, ads, etc. and she does concept art for videogames and animation.

She already has exhibited on some group shows, so far. In fact, she has recently participated on the collective show of the Illustrators Association, here in Buenos Aires. Her illustration was displayed on Children’s Book Fair.

And this same year she took part on a big Street Art show on the MACRO (Museum of Contemporary Art of Rosario, in Santa Fé – Argentina).
She would like to make more shows and to show more pieces each time. And she would love to exhibit overseas!

To promote her artwork, Mako Fufu uses her website: www.MakoFufu.com and she keeps her followers up to date via Facebook: www.facebook.com/MakoFufuFB and Twitter: add her with @makofufu
She has opened a Google+ account too! Wow, the geekest graffiti girl ever!

She is able to work on ANYTHING. She loves challenges.
She has worked on a few skateboards, and she has recently started to make some customizing on the used spray cans.

She is strongly influenced by Disney, and… manga and animation, obviously! Her favorite artists are Mutsumi Inomata and Hiroyuki Utatane. But she is easily inspirated – that’s why I do
street art, concept art, video, paintings and a whole lot of different stuff, so I could make you a list of inspirations… but it would never be complete! Mostly comics, animation and
videogames stuff!

My first street art, literally, on the streets? Sure I remember!
It was a stencil. And I was really really stressed. I made it on a school facade, on a really important avenue in Buenos Aires downtonwn, at night. Nothing happened, but looking back it wasn’t a really smart choice! Anyway, I’ve discovered that just for the fact of being a girl I seem to get more sympathy
than my male colleagues.
Mako Fufu works on different kind of sizes, but her favorites are L to XL. She hasn’t tried XXL yet – « I’m guessing that XXL is taller than a 2 floors building, isn’t it? but I’m pretty sure I’d enjoy it a lot!

She has made around 20 painted pieces, most of them between 2010 and 2011. But she couldn’t count how many marker drawings / tiny stickers / wheatpastings / stencils she has done on the streets. « I never leave home without having at least a marker and little stickers with me »

You can find pieces of Mako Fufu only in Argentina, for the moment, in 4 cities: Buenos Aires, Mar del Plata, Rosario and General Roca.
Find here a map of her murals: www.tinyurl.com/fufumurals

I DREAM of traveling around the world and making murals! I want to start ASAP!

The next piece will probably be a girl, sure, as she likes drawing sexy animation girls! But she always improvises, unless it’s a commissioned work or a group work with a theme.
It also depends on the kind of wall she gets (in terms of color, texture, size, shape… and how many hours she can work on it and according to the materials she can have.

She is planning to paint a martial arts-related mural along with some friends, during September. She is not sure if this would be on a park or a building. They’re still organizing a festival.

She likes painting on walls. « Sidewalks are complicated! » She made a sidewalk once, and people didn’t want to walk over it because they were afraid to ruin the piece! So cute!

And there are some huge plastic containers (recycle trash cans) around her city that are AWESOME for markers.
She wants to make some windows and cars as well. « Haven’t tried yet! »

Any tips to tell us?
« Let it flow. Sometimes the wall and/or the paint wants to take you somewhere else. Don’t get stuck on making it look exactly the same that your sketch you’ve made! Free your mind and your hand!  And – most important – enjoy the process!«

She always paint with music, ALways! She loves David Bowie and Queen. She also loves dancing, so Dance, Pop and some Latin music are great for having pure fun.
About movies, she prefers horror movies! And comedy! She loves Sci-fi as well, but not the outer-space.

She is the kind of person who forget to eat and to drink while painting. « I get really carried away! »

Her favorite color is Magenta, but her must-have color is Yellow. She always uses it to draw the lines. Even if she covers it with other colors later, it makes them look shinier.

She always takes a photo in memory of the piece she just did, and above all since she is spending more time working on her murals.

A message for the StreetLove team?
You guys rock! Thanks a lot for interviewing me!! 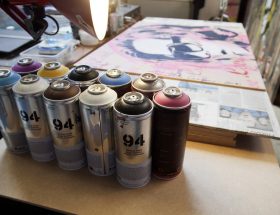 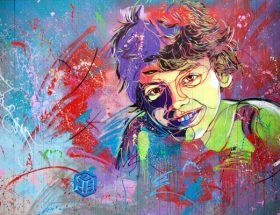 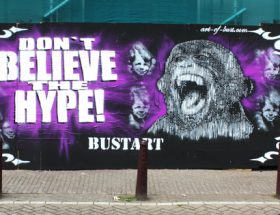