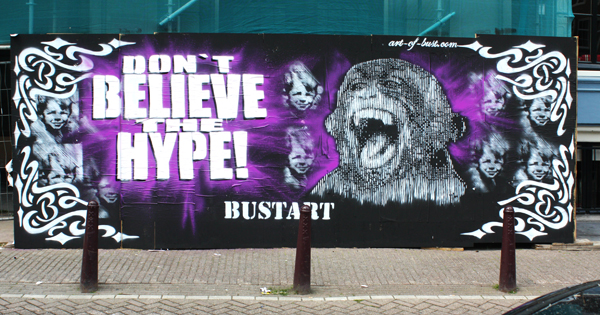 Better than never, we were in contact with Bust art for having seen a few art pieces on the Paris streets that we loved, and as you know, time flies… so I now publish his interview we did a while ago. We saw him again at the great event of the MUR for its 5th anniversary.

Bustart or Bust is from Basel in Switzerland but he is now living in the great city of Amsterdam in Netherlands.

He was busted by the Police in 2005 so he changed his name in to ‘busted’ then ‘buster’ and from this to ‘bust’ because someone used the name Bust 10 years before in Basel. So he finally decided to go with Bustart as his artist name!

He started with classic graffiti in 1999 and changed in 2005 to street art.

He began making street art by starting pasting stickers and posters. Then he made his first stencil and did installations. Because there is no limit in the world of street art, he did everything to all times of the day.

How old were you have when you created your first street art?

At the age of 6, I painted hundreds of skulls on a playground. I got from my cousin a big edding marker and just started painting. Of course, I got in troubles but I think that was the day I recognised the paper had not the limit.

Bustart loves to work with a bench of friends but he is no longer part of a crew – he was when making graffiti (crew named: seventwo gangsters and bandits)

Bustart is a full-time street artist.

Bustart works with all materials on all kind of possible and impossible surfaces! His biggest inspiration comes from the consume society he lives in. Brands and lifestyle is the big thing here. Also the influence of America in Europe is a theme for him. He has this inspirations because he thinks he lives in a part of the world which has everything and from everything a bit too much.

He remembers perfectly his first street art piece: it was on a wall, where he painted out a girl and a lot of birds. He did that on huge stickers (1.5 meter) and pasted these on a metal wall. Then he was not stressed about it because this was just a joke to all the stuff he painted the years before (his graffiti work).
But if he is doing something that takes more time than just pasting a sticker or a poster, he always feels stressed about it.

His street art pieces are all sizes because they need to fix in the streets but he prefers doing XXL.

Approximately he has been doing over 3,000 pieces of art including graffiti, in over 10 countries and 100 cities.
He has everyday at least 3 new ideas!

Bustart likes stencils a lot, because it stays longer on the streets, and he is a also a fan of comic related graffiti’s.

Spray cans are his favorite tool to work with, and black color especially.
To work, he never leaves without beers and cigarettes…

His artistic references (street art or not) are Jean Tinqueli, and a lot of stencil artists…
He prefers music to movies, such as hip hop, funk, 70s 80s sound, dnb, rammstein… I like it a lot!

There is always something coming up I hope to realise some bigger murals, and if you know some please let me know!

Do you have a message for the StreetLove team?

Thanks a lot for your love and support! 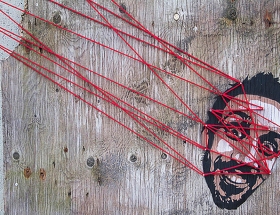 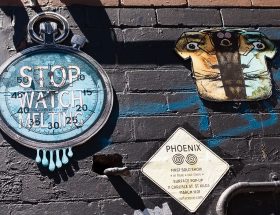