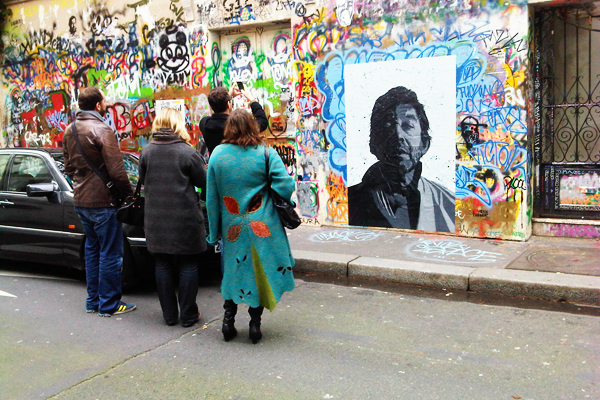 We announced on our StreetLove Fan page on Facebook that we wanted to feature street art fans portrait. The idea is to let fans of street art to tell us what they like, which city they prefer in terms of street art, the artists they like to follow, etc… The aim is to share our passion for street art and graffiti around the world.

For this first fan portrait, I’m glad to introduce you to Michel alias Server Pics, from Geece, and living in Athens. Michel spent a few weeks on holidays in Paris and wanted to know where to find nice street art spots in Paris.

This is the impression of Michel alias Server Pics on FlickR about Paris Street Art :

My journey started at Rue des Pyrénées near the Metro station Porte de Vincennes. There I found a big number of street art paintings one after the other on the walls of a wide warehouse building. First of all, I noticed that a lot of the paintings were drawn over older ones. It gave me immediately the impression of the lack of space for all these artists to express themselves.  This goes completely in opposition with the unwritten rule in Athens where a street artist never draws overs another’s writing. Unfortunately, the lifetime of a street painting in Paris seems to be less that in Athens streets, The second difference with Athens, is that I was not alone taking pictures of these paintings. It was in fact, a little bit too crowded at some time.

My second stop was rue Desnoyer (Paris 10). There I found the « Amy Winehouse » portrait painting. I didn’t feel the area very easy for photography, a lot of people are observing you. So I didn’t stay long there.

My last photos are from the Marais district between St Paul station and Hotel de Ville. This was of all my preferred area because it was very close to a photo shooting experience in Athens. there you have to look carefully for street art. Because in can be hidden in a very subtle way. There you feel a sense of adventure in searching for street art, like in a safari.

The next day while walking in front of the Apple Store at the Opera, I noticed a woman walking out in a hurry of a taxis with a camera. She stooped in front of the store and took a series of pictures of the Apple logo. In less than a minute she was back in the taxis and disappeared. When I approached the logo, I noticed the face in the shape of apple logo. I learned later that it is the work of the street artist Gregos. He has a good sense of humor, i wish we had some of his artwork in Athens, Greece.

I would like to thank 100driiine # StreetLove.fr  owner of this site, for indicating me the addresses for this photo shoot and for giving me the occasion to publish this article on her site. I hope to be back in Paris soon for more pictures of Street Art«

Did you enjoy that street art fan portrait?