StreetLove has been contacted to showcase the artwork of the artist Said Dokins from Mexico (born in 1983), and when we like, we share. Here are some photos, his projects and a short story on his background.

Said Dokins is specialized in calligraphy and graffiti. He likes twisting symbolic orders and political enunciation. Dokins lives and works in Mexico City. His cultural practice takes on contemporary art production, research and cultural management.
Among other awards, he is the winner of the Ibero-american Contemporary Art Creation Prize (Juan Luis Vasallo 2015 in Cadiz, Spain). His work as an artist has been shown nationally and internationally.
For Dokins, every experience is a trace, a psychic impression that creates a texture in our symbolic universe. In that sense, calligraphy and graffiti aren’t just on paper and ink, on the walls and spray, but on every event of our existence.

Here are a couple of walls he did and sent us:

The first one, is in the city of Coachella (California) for the « Coachella Walls » Festival with the support of Date Farmer and the curated by Med Sobio. The theme Coachella Walls is working on this year is « American Women: a Homage to the Women of the Americas ». In this mural, Dokins has inscribed the names of some collectives and organizations led by women, seeking and fighting for the defense of our human rights in Mexico and Latin America.

This second is part of his last collaboration with Monkey Bird collective for the Street Art Festival in Evry (Essonne, France).
Through these walls they explored the great question of humanity in a dichotomic way. In one hand the mural ‘Looking at stars’ approaches the fascination of men with the universe, their allurement of stars and the conquest of what is beyond our perception. On the other hand ‘The secrets of mind’ looks into the mysteries hidden inside our head and the ways they had been interpreted through time.

In June 2016, he did an european tour and stopped in Germany where he did some interventions of the series “The Hidden Text” in the context of IBUG Festival, in Limbach, Oberfrona and at OpenSpaceGallery (Freiraumgalerie) in Halle. And enjoy this time to do an exhibition in Bordeaux, France – at Cox Gallery.

The project “The Hidden Text”, attempts to elaborate a reflection on history and the marks that certain events leave behind. In Germany, the former division remains there in a different way, it’s visible through architecture, people’s life style, economy, or even social control and politics. 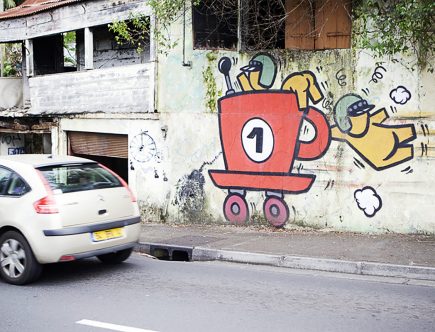 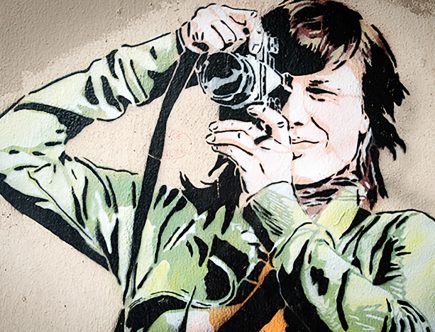 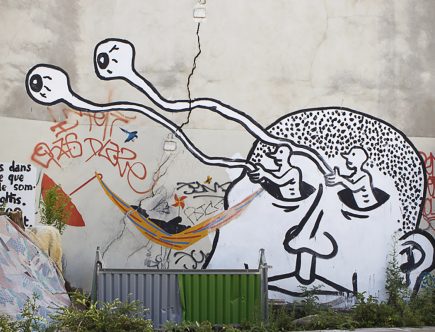